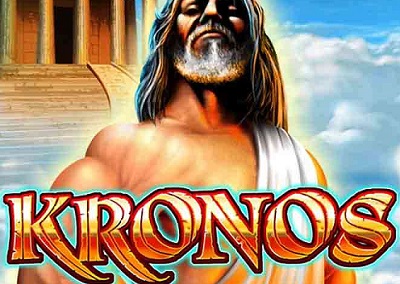 Kronos is an online video slot game created by WMS. The theme of the game is based on Greek Mythology. Kronos himself was the original leader of the Titans and a direct decedent of Gaia. His son Zeus eventually overpowered him and became the famous Titan leader that most people are familiar with. In this game, players will encounter images of Greek mythological creatures and symbols. The game features top-class graphics with classic WMS casino style sound effects. Set in the cloud palace above Mount Olympus, the game offers up big payouts and multiple bonus features.

The slot machine setup in Kronos comprises of 5 spinning reels with a total of 20 paylines. At the start of each spin, players can select the number of paylines to play as well as the number of coins bet per payline. The higher the bet, the bigger the payouts on any line win. The real money online casinos game also offers up a number of bonus features in the form of Stacked symbols, Wild symbols and a free spins bonus round. On the reels, the highest paying symbols of the game are all Greek mythology based. Kronos himself is the highest paying symbol of the game and pays out from left to right and from right to left.

The second highest paying symbol in Kronos is the cloud palace. This is followed by Pegasus then the gilded king’s throne. Completing the high paying symbols is a gold-plated jewelled arm band. For the lower paying symbols, WMS have used the four card suits namely spades, hearts, clubs and diamonds. The Wild symbol in this game is the gold lion statue. The Wild symbol substitutes for all other symbols in the game except for the medallion feature symbol. The top paying symbol including bonus symbols is Kronos himself who appears staked on the reels. This gives players a greater chance of forming winning combinations.