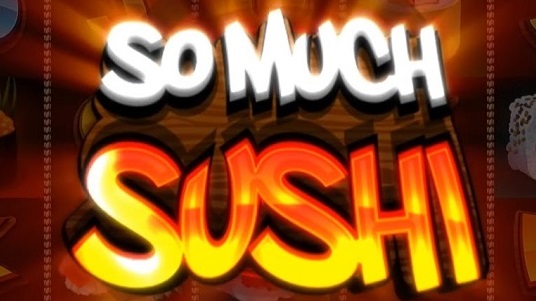 So Much Sushi is part of the So Much More range, developed and produced by the Microgaming studio that is based in the Isle of Man. The series also includes So Many Monsters and So Much Candy, and the basic mechanics of each of these is the same. Every game has the same basic design and background, along with similar special features, bonus rounds, betting ranges and winning ranges.

The Top Jackpot in So Much Sushi is 64,000 coins per payline, awarded in the Bonus Round described below, and the coin value range is 0.01, 0.02. 0.05, 0.1 and 0.2 per appearing symbol per line. The game features 5 reels, 25 fixed paylines and a theoretical RTP of somewhere between 96% and 97%. The game can be set to AutoPlay, as most Microgaming entertainments can, to allow players to carry on with other things while they are spinning. No-deposit free games also allow for practice, skill refinement and confidence building, before any actual cash is staked.

Like its fellow So Much More games, So Much Sushi features black reels and brightly coloured 10, J, Q, K and A symbols making up the lower-value icons. The writing on the screen is done in a street art style, and the background to the game is also kept simple and black. The higher-value regular reel symbols are different Sushi types done more illustratively than realistically, including Maki, Temaki and Nigiri. The game’s background music is a soothing oriental tune, and successful combinations are accentuated with animations and small Eastern melodies of their own.

So Much Sushi features a Wild Symbol in the form of a game logo. This can substitute for any regular reel symbol to make up winning combinations, and can multiply the payouts of the configurations it is part of by up to 300 times.

The Free Spins Scatter Symbols are the only icons that the Wilds can’t stand in for like in many pokies at this suggested site. When 3 appear anywhere, players are given the chance to choose between 5 Free Spins rounds. These each offer different multipliers and amounts of Free Spins, with total bets being multiplied by up to 32,000 and between 8 and 16 freebies being awarded. The higher the number of Free Spins a player chooses, the lower the risk but the lower the potential payouts as well. All of the options can be tried out in Practice Play, so spinners can find the ones they are most comfortable with.

Like similar features in the other Much More casino games, this gives the higher-value symbols in So Much Sushi the ability to multiply themselves and gives the game its moniker as well. Each piece of Sushi can be split into 5 symbols, so a winning combination of 5 can become a winning combination of 25 which can pay up to 560x the original stake. This feature is quite unique to Microgaming’s Much More entertainment range, and can really increase players’ chances of winning.