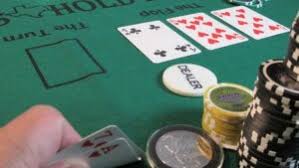 Poker is home to a powerful psychological concept called “tells”. The concept of Poker tells refers to certain actions players make around the Poker table – actions that might or might not give away accurate information about the strength of the hand they happen to be holding.

There are two types of tells in Poker. The first type of tell is from an opponent completely unaware of the fact that they are providing a tell, and the second type is from a player acting in a way deliberately meant to deceive their opponent by providing a false tell. The second lot obviously know they’re providing a tell.

Tells come in many shapes and forms and are often not quite how they seem – even when provided unintentionally.

Hands that shake aren’t likely part of an act. This is so simply because its nearly impossible to fake believable trembling.

Important to remember when trying to cash in on the shaking hands tell is that some Poker players are constantly nervous – irrespective of the quality of their hand. Instead of a nervous tremble, the type of “shaking hands” we’re referring to is a more sudden sort of hard tremble, for e.g. the sort of shaking displayed by a typically calm player.

Popular reasoning around tells dictates that a player with shaking hands is a nervous player because of a particularly poor hand. This theory has since been called out by several high-profile Poker professionals as the wrong way around. Shaking hands, so say the pros, are more likely a sign of a splendid hand, and the result of a sudden release of tension and anticipation.

When studying tells, it’s important to realise that no player wants to give away his hand. Also, that most Poker players are aware of the existence of tells.

As such, a player expressing their dissatisfaction in an exasperating tone while going out of their way to put all of the signing and shrugging they could possibly muster on full display, is probably in possession of a strong hand.

What To Know About Breathing

A sudden change in the breathing pattern of a player is one of the surest giveaway tells in Poker.

Much like the shaking-hands theory, players who suddenly breathe faster and with more excitement are typically displaying tension and anticipation as a result of their being about to reveal a strong hand.

If ever you should find an opponent staring at you, it’s safe to assume that they are in fact acting out a false tell.

A stare is more often than not also a dare – an action meant to intimidate you to keep you from raising. A staring player with a hidden agenda will very seldom raise, which is another nearly-failsafe giveaway that the entire display of dominance is no more than an act.

When learning to read and correctly analyse tells, keep the following key takeaways about tells in mind: