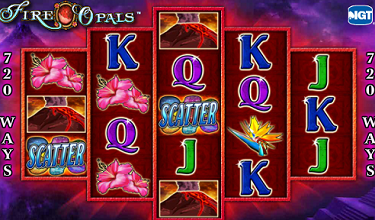 Fire Opals is an online game with many great opportunities for winning. It has five reels with a hexagonal layout, and 720 ways to win big prizes. The minimum the player can win is five times the original line wager, and the maximum is two thousand times the original wager on that line. Players of every level of experience will be able to play this game. Fire Opals can be played for free or for real money. This slot game has creative reels, but like all slots games the player has to find three symbols of a kind on a reel.

The theme of Fire Opals is mainly Hawaiian, and the player will see the opals in different glowing colours in the background, as well as flaming volcanoes erupting fire and brimstone. There is also a Bird of Paradise, an Orchid and a beautiful Woman. There are also the standard playing card symbols as well, like Jack, Queen and King.

The possible 720 ways to win are always active, and with each spin the player is wagering 50 coins. Like total balance shown on the slot screen, on either side of the spin button, the player will see a calculation of his total wager, which differs according to the coin value that was chosen, and also the total payout after a winning spin.

This game also includes a MultiWay Xtra Award Feature, which is a signature feature International Game Technology uses in many of its games. It means that Fire Opals will pay for the same symbol on any position on adjacent reels, and that the winning combination can start from either left to right, or right to left. The 720 ways to win are active at every spin, so the player does not need to adjust the number of pay lines or coins, but just the value of the coin. This affords players an increased chance of hitting a winning combination.