Day of the Dead online slot was released online in 2013 by IGT and is one of their multi-way xtra wager system slot games. There are five reels arranged in a hexagonal shape. This means there are five rows for the middle reel, four rows for the second and the fourth reels and three rows for the first and fifth reels. This allows for the 720 different ways to win feature.

The theme of the online slot game revolves around Dia de los Muertos, translating to Day of the Dead, which is a Mexican festival where people pray and celebrate their lost loved ones and guide them to a better afterlife. It is a vibrant celebration that runs over three days starting on the 31st of October which is also celebrated as Halloween around the world. The vibrancy and festive nature of this Mexican holiday is seen in the graphics and sounds of the online slot. Mariachi style music is heard which rages in tempo as the game unfolds. The graphics include Mexican motifs with symbols predominantly depicting various skeleton characters, flowers and food items such as various fruit and a pie as well as drinks like fruit punch and a steaming mug.

With no selectable pay lines on the Day of the Dead reels, all of the 720 ways to win lines are active throughout the game. The value of the bet can vary but regardless of what value the bet is an amount is paid for winning combinations as per the slot game’s pay table. Bets start at 50 coins per spin and go up to as much as 100 coins with 1 000x the bet being the top jackpot prize.

Two different Day of the Dead celebrations are portrayed on symbols and either involved in a winning combination results in the reels coming alive with dancing skeletons across the screen. Winning combinations can run from both left to right and right to left to make up the 720 ways to win but they must be matching symbols in consecutive order. 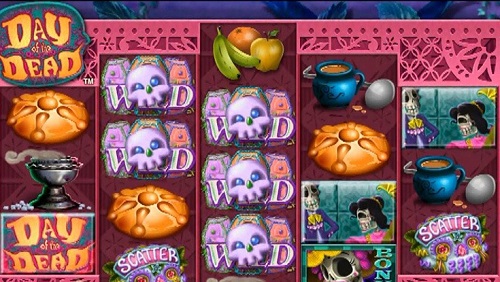 Special Day of the Dead Symbols

The Day of the Dead online slot wild symbols are those that read wild behind a cookie cut out of a skull and coffins. These appear in piles much like stacked wilds to offer additional chances at possible winning combinations. The wilds substitute for all symbols apart from the bonus symbols and scatters.

The scatter symbol is an elaborate mask. A minimum of two of these symbols landing on the reels result in a multiplier of anything up to 50x the bet while the bonus symbols are the ones to trigger the bonus game. These are represented by different coloured dressed up skeletons.

The featured bonus game in the Day of the Dead online slot game is a free spins round which is triggered by five of the yellow bonus symbols landing consecutively on the reels. Eight free spins are awarded but any combination of bonus symbols appearing during this round means more free spins are given which ultimately can amount to 96 altogether.