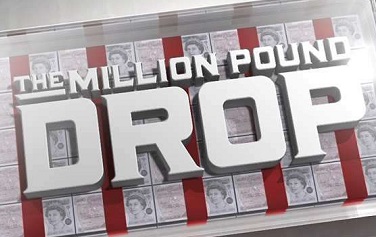 The Million Pound Drop online slot game is a creation of Endemol who are known for recreating game shows into online slot games. Based on the internationally renowned television game show of the same name, this online slot features various bonus features which are representative of the game show as well as appropriate graphics and sound effects.

There are five reels and three rows of symbols with a total of twenty pay lines. The pay lines are selectable and each pay line allows a bet of any value from 0.01 up to 10.00 making the maximum bet for every spin an amount of 200.00. Million Pound Drop has an auto play feature which can spin the reels up twenty five times automatically on the same bet and without interruption.

The red wild symbol is the Million Pound Drop online slot game’s highest paying symbol and pays out the jackpot prize of 2 500 times the coin value. These symbols also pay out for landing three or four times in a row and one or more wilds may assist in forming winning combinations if possible by substituting for any of the regular symbols.

Apart from the red wild symbols, Million Pound Drop has a golden wild which only ever appears on reel three. When it does it randomly turns up to four symbols wild before transforming into a red wild itself.

When the drop bonus symbols appear on their respective reels the Million Pound Drop online slot drop bonus game is played. Here a pile of cash is placed on three out of four trap doors. Three random trap doors will then drop and if there is still cash on the remaining trap door it is rewarded and the bonus game may be played again. This game is playable up to eight times consecutively as long as cash is awarded for every round.