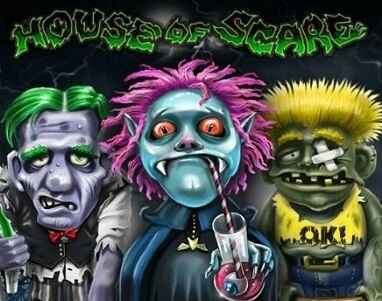 Another great slot from Games OS, House Of Scare takes a horror approach to the world of online slots. This game is themed around a haunted house with a selection of ghouls and ghosts who populate the surroundings. House Of Scare is a five reel, twenty five pay lines, and three reel slot. It features wilds, scatter symbols and a unique Coffin Racing bonus game. With its low wager value, House Of Scare is a great game for people who do not want to break the bank with their wagers and people who are looking to have a lot of fun with their real money wagering. If you do not wish to use real money, you can use free money to play.

House Of Scare features a red haired witch as the in game wild symbol. This symbol will substitute itself for any missing symbol required to complete a winning combination it is part of. The wild symbol will also pay out if you manage to land at least two of them on a fixed and activated pay line. Two of the wild symbols will pay out ten coins to players. Three matching symbols reward you with fifty coins, four matches mean five hundred coins. The maximum payout is for five watching wilds. This combination will pay out five thousand coins.

The scatter, or as the game puts it, Scare-ter bonus symbol is represented by what can only be described as the remains of a bird. This scatter symbol will only appear on the first, third and fifth reels. As a scatter symbol, it will trigger the scatter bonus as long as two of the symbols are on screen. They do not need to appear in an active pay line. If you land two of them, the reels they appear on will freeze and you will get free spins on the three remaining reels. Three scatter symbols will reward you with a bonus multiplier. 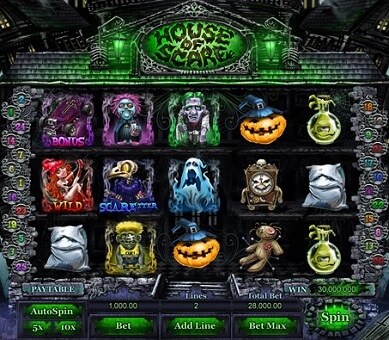 The purple bonus icon with the Coffin race car on it is the game’s unique bonus trigger. At least three matching symbols trigger the coffin racing game. You will be awarded bonuses depending on where in the race your vehicle finishes. This symbol will also pay out if you land between three and five of them on an active pay line. This symbol will pay out a maximum value of six hundred coins for five matching symbols.

Wagering in House Of Scare

The gambling game lets you place wagers using the in game coin currency. You can adjust the value of your wager coins between the values of $0.01 to $0.20. There are a host of menu options on screen that will display anything from the game rules to your last win value. You can also select an auto spin option that once activated, will automatically spin the reels a set number of times with a set wager value.

Additionally, House Of Scare also features a gamble option. When selected, this option lets you take an additional wager. Once you get a winning combination, you can wager your winnings again on a mini game where you need to select either a colour or suit from a standard deck of cards. If you pick correctly you can earn either a two times, or four times multiplier on your wager.